Holidays in Greece – 6 wonderful excursion destinations in the Peloponnese

Holidays in Greece in the Peloponnese with children? How do you come to that? It all started with a reading project at school and a son who doesn’t like reading at all. A bookseller recommended Percy Jackson – according to her a mixture of Harry Potter and the Greek gods – and it was a complete success! So we have been traveling in Greek mythology since the autumn break. Actually a very dry topic, but thanks to Rick Riordan and his cool written books, easy to understand, funny and full of incredible adventures.

Our sons therefore quickly wanted to travel to the temples of the gods in Greece, preferably to Olympia – and a new travel destination was found. Some will say that it doesn’t always have to be what the children want. Of course not, but this way we have a relaxed vacation with interested guys. And that is extremely relaxing!

We flew to Athens and then we took a rental car to the Peloponnese to Dounaika, a place near Olympia, to the wonderful ‘White Villas’ (which I report on in a separate blog post). From here we visited the archaeological sites of Olympia, the picturesque town of Katakolo and the more touristy Kourouta. On the way back to Athens, there were stopovers at the imposing Rio-Andirrio Bridge, ancient Corinth and of course the Corinth Canal. 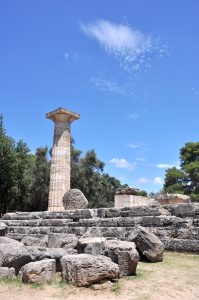 In Olympia there are the excavation sites with the Temple of Zeus, an archaeological museum and the museum of the history of the ancient Olympic games.

The best thing to do is to start with the Archaeological Museum and buy a ticket for all three areas here. It costs EUR 12.00 for adults and children up to the age of 18 have free entry (if necessary, upon presentation of their ID). When we got to the excavation site, there was a long line at the ticket office. So we were happy to have already bought the tickets in the museum. 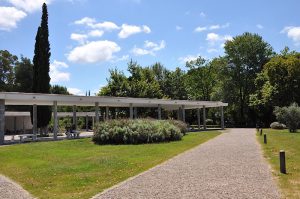 The archaeological museum is very nicely set up, quite clear and well-tempered! Here you can see the approximately three meter high marble statue of Nike, which used to stand on an eight meter high pedestal in front of the Temple of Zeus, as well as the gable sculptures of the Temple of Zeus and many other objects. The museum was just the right size for us – interesting without getting boring. A little tip: there is a machine with ice-cold drinks in front of the toilets! A relief in the hot summer temperatures! 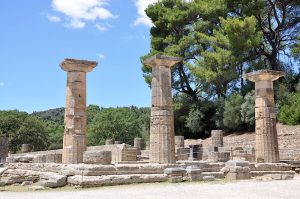 The excavation sites are of course mostly ruins and our boys were a bit disappointed that there wasn’t a ‘real’ temple to admire there. 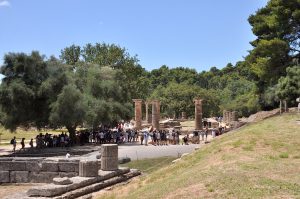 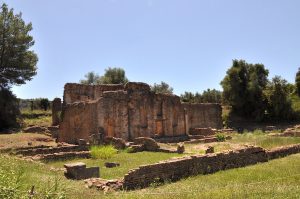 Nevertheless, it was great to have been there, where the Olympic flame is still lit today. 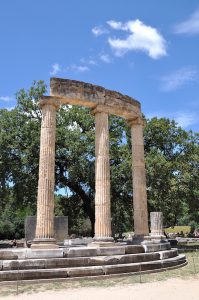 We didn’t go to the Museum of the History of the Ancient Olympic Games because of the heat and the somewhat longer way to get there.

On the way back to the parking lot we ate directly in the ‘Ambrosia Restaurant’ – the food was even better than we would have expected in such a tourist place.

If you want, you can take a walk through the town of Olympia afterwards. There are a few shops and many souvenir shops here. Due to the hot weather, we wanted to go back to the ‘White Villas’ and cool off in the pool! 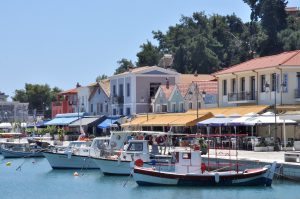 Another excursion took us to Katakolo. After a 30-minute drive, we were rewarded with a postcard idyll. There are several restaurants at the harbor and behind it a street with a few small shops. 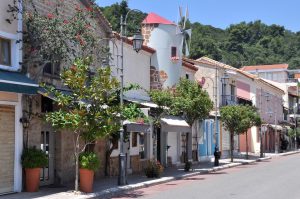 This beautiful place is also regularly visited by cruise ships. Some shops even only open when one of these huge ships docks. 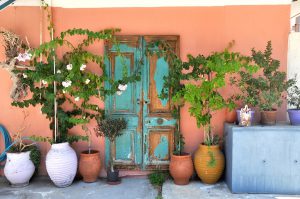 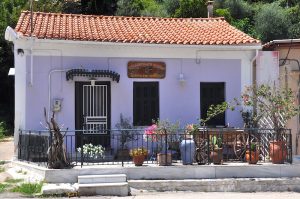 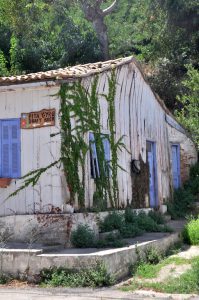 Since we found the colorful village so beautiful, we drove here again in the evening to have dinner at the harbor. 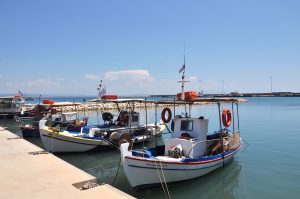 When we arrived there was a wedding taking place in the local church and the decorations in front of the church made my heart beat faster. After I asked, I was even allowed to take a few photos :-)) 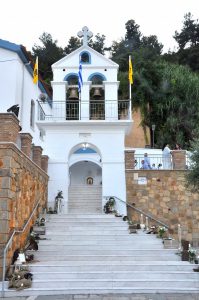 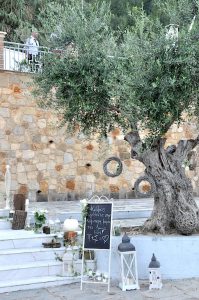 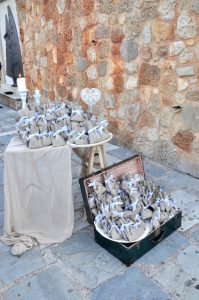 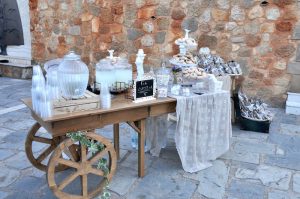 Another evening we went to the nearby Kourouta. There is a promenade with some really cool bars and restaurants and a small ‘fairground’ for the children with bumper cars, trampolines and mini carousels. 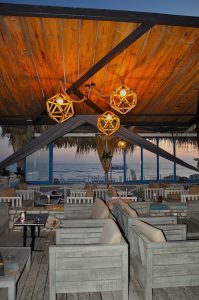 For one evening we found it very nice here, but during the day it would be far too touristy for us on the beach with its many loungers. 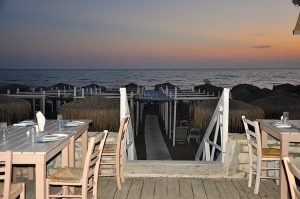 On the way back to Athens we made a short stop at the Rio-Andirrio Bridge. 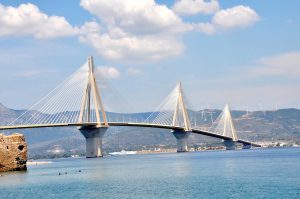 This impressive bridge connects the Peloponnese from the place ‘Rio’ with the Greek mainland. With a length of 1790 miles, it is currently the second longest cable-stayed bridge in the world.
In Rio at the port, directly below the bridge driveway is the Rio Fortress. It was built in 1499, expanded in 1687 and served as a military prison for many years. I found the contrast between the old fortress and the modern bridge in the background particularly appealing. 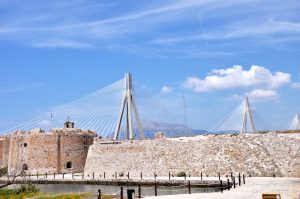 On the way to Athens we made a second stop in Corinth. We wanted to see ancient Corinth (Acrocorinth) at least from a distance. With almost 40 degrees in the shade, we couldn’t bring ourselves to look at the entire excavation site. 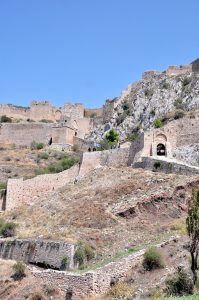 If, like us, you are out and about in summer, you should definitely leave the motorway for a short while and drive up the mountain (this takes about 5 minutes).
Just the view of the ruins of the imposing old town on the mountain is worth a stopover. 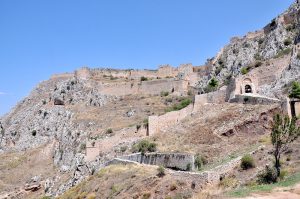 You can visit the castle complex from Monday to Friday from approx. 9 a.m. to 3 p.m. (the opening times were indicated very differently on the Internet). Entry should be free.

The Corinth Canal is an absolute must and highlight during a holiday in the Peloponnese. 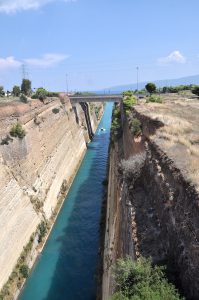 It was built from 1881 to 1893 at the narrowest point in the Peloponnese. Thanks to the 3.94 miles long canal, the ships save the 248 miles route around the peninsula. It is about 27 yards wide at the water surface and was dug up to 91 yards deep into the rock. 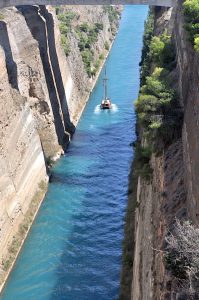 To reach the photo bridge on the canal, take exit 10 ‘Epidayros’ from the A8 motorway and then keep left. If you enter ‘Corinth Canal Photo Bridge’ on Mr. Google, you will be taken straight there. 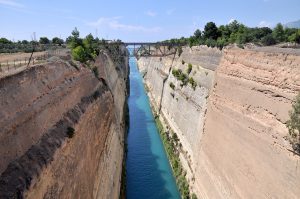 There are numerous other great excursion destinations in the Peloponnese, such as Mycenae, Sparta or Epidaurus. However, since it was a summer family vacation for us, the wonderful excursions described above were enough for us to see. Especially because we then spent three more days in Athens (if we were already on the trail of the gods, then we did it right!).
So it was an ideal and varied time in Greece for us: Relaxation in the Peloponnese and big city troubles in Athens.

You can find detailed information about the wonderful White Villas in my detailed blog post:

If you got the taste and think that the Greek world of gods would also be something for your children, I have put together a selection of books, audio books and films by Rick Riordan for you here.
We particularly liked the books ‘The Heroes of Olympus’. The nice thing about them is that this is not just a hero, but six youthful demigods – boys and girls – who have to solve various tasks to save the gods.

The links to the books are so-called affiliate links. If you click on such an affiliate link and buy the book via this link, I will receive a small commission from Amazon. For you, the price doesn’t change!
So if you have found a suitable book for your next vacation on Charming Family Escapes, I would be very happy if you buy it via the link on my page. So I can continue to use my time looking for beautiful books suitable for your next vacation trip! Thank you so much!