Echternach is located in the east of Luxembourg and is the oldest city in the country. It was founded by St. Willibrord in 698 and is located directly on the ‘Sauer’ river, which forms the border with Germany. The city is also the capital of the Mullerthal region and thus the cultural center of Luxembourg’s Little Switzerland.
In Echternach you can also start a wonderful hike on the Mullerthal Trail.

First, however, to the beautiful city of Echternach: The city center is very clear and most of the sights are very close to each other.
At the tourist information office, which is diagonally opposite the basilica, you can get a free city map with the cultural trail through Echternach’s old town, the ‘Via Epternacensis’.

With the circular route you can start directly with the Sankt Willibrordus Basilica. 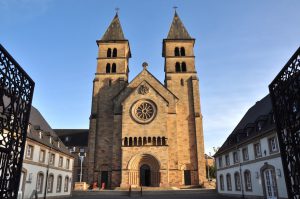 To the left of the basilica is the imposing Benedictine abbey, which has housed a state high school since 1899 – I would have liked to have gone to school there. 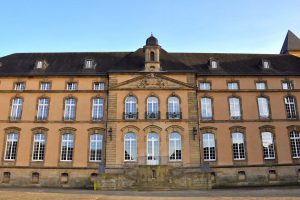 In the basement of the abbey is the abbey museum with the famous ‘Codex Aureus Epternacensis’ and many other writings that give an insight into the history of the monastery. 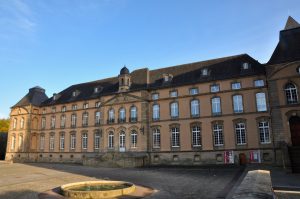 If you now go through the wrought iron gate opposite the abbey, you will come to the monastery garden with orangery. Unfortunately we were a little late and the garden was already closed. Nevertheless, we were able to take a look at the orangery through the gate. 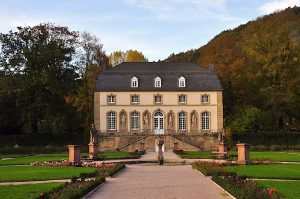 You will find the beautiful pavilion in the former pleasure garden of the abbey if you go to the left of the Benedictine abbey through the arches and past the football fields. 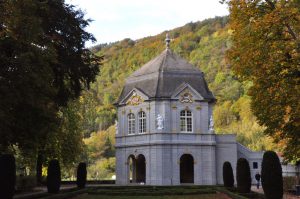 Since we had already hiked the Mullerthal Trail before our tour through the city, we did not walk the entire cultural path through Echternach, but from the pavilion back to the market square with the former palace of justice, the town hall and the justice cross. 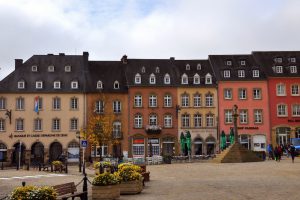 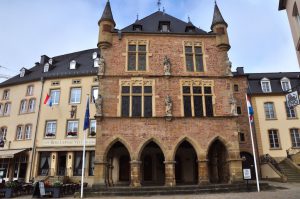 There are a few other sights in Echternach, such as the city wall (we had already seen them from the bus on the way back from hiking), the Gothic House, the Peter and Paul Church, the Hihof with the museum of prehistory, the Garden pavilion ‘Parlodrome’ and a little further outside the Mother of God Chapel and the Roman villa, which dates from the 1st to 5th centuries.

Hiking on the Mullerthal Trail

As already mentioned at the beginning, we hiked from Echternach on the Mullerthal Trail. A free hiking map is also available from the tourist information. You can now decide whether you want to hike the entire circular hiking trail E1 with a length of approx. 7.7 miles or the section from Echternach to Bergdorf with about 3.7 miles.
We decided on the shorter version. On the one hand, we didn’t want to overstrain our children and, on the other hand, you will pass most of the highlights of the route on this way.

The hike starts opposite the old bus station at the end of the pedestrian zone. After the last shop, turn left and walk up the narrow path.
You can make a first stop at the lookout point with a wonderful view over Echternach. The view over the city is really fantastic.

If you go further, after about 0.5 miles you will reach the Wolfsschlucht, a steeply sloping, smooth crevice. The hiking trail first winds down many steps and then up again on the other side. 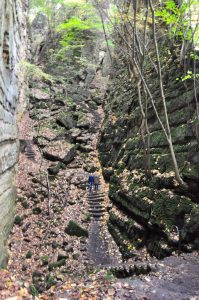 The path now leads through beautiful nature and after about 0.9 miles you come to the maze. Here the hiking trail meanders through rock formations of various sizes. 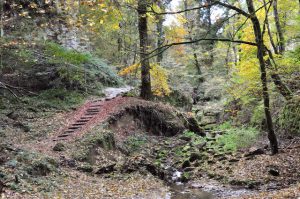 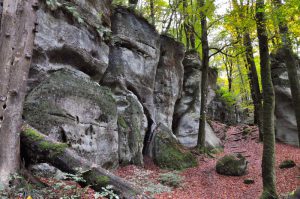 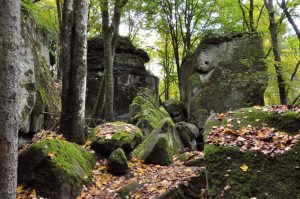 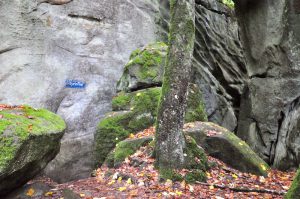 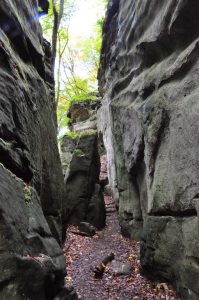 Next you will reach the perekop. The large rock is on the other side of the road, which runs a short section along the hiking trail. You can climb the viewing platform on the rock via many steps and from there you have a view over the treetops of Luxembourgish Switzerland.

We continue to Huel Lee, also known as Hohllay. This is a small rock cave that used to be used to break millstones for the mills in the Mullerthal. Accordingly, the bulges in the rock can still be seen today. 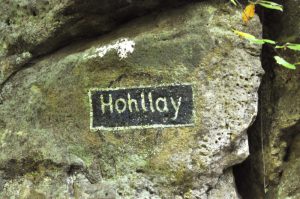 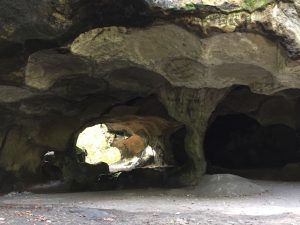 The small amphitheater ‘Breechkaul’ is only a few minutes. The stage of the theater is also a cave from which millstones used to be broken. 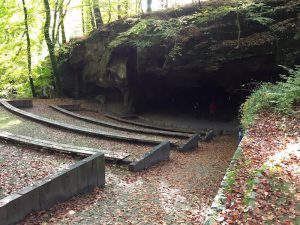 Berdorf – the destination of the hike

A track across the fields takes you to the nearby town of Berdorf, which is known for its cheese production. There are various hotels and restaurants here, the water tower ‘Aquatower’ with a panoramic platform, as well as cheese production and a glass-blowing workshop that can be visited.
You will find the bus stop in the direction of Echternach if you follow the road and keep to the right behind the church. The bus runs every hour (actually always at a quarter past, but with us it came 10 minutes later) and within about 10 minutes you are back in Echternach.

The city center of Echternach is quite small and the sights are close together. This makes it easy to combine a visit to the city with a nice hike.
I really liked the route on the Mullerthal Trail. It is varied and not too crowded in autumn. In the beginning you saw a few hikers and especially at the Wolfsschlucht it was a bit crowded, but we hiked many stretches of the way without meeting anyone. In total, we were on the road for about three hours with a break and photo stops.
The route is not passable with a stroller, but for children from primary school age who can walk well, this is a nice hiking route in my opinion.
Since there are no places to stop for refreshments along the way, you should bring some food and drinks with you for the hike.

A visit to the city of Echternach in connection with a hike on the Mullerthal Trail is an absolutely recommendable day!

As always, this is an unsponsored post and thus unsponsored advertisement for beautiful Luxembourg!

… and here are some more tips for an unforgettable holiday in Luxembourg:

Would you like more information? Here you come to the official website of the city of Echternach.

Hello, I'm Diana Müller and I warmly welcome you to Charming Family Escapes. Are you looking for a lovely holiday apartment, a chic hotel, a charming B&B or a cozy holiday home for your next vacation? Here at Charming Family Escapes you don't need to look far, because you can simply choose your holiday accommodation from the exquisite preselection for many different travel destinations. Then you book it directly with one of the major providers - this saves you a long search, but you don't have to book with a website you don't know. For the mediation I then receive a so-called affiliate commission from the respective provider, which does not cost you anything extra. In addition, my blog will give you valuable tips on various holiday destinations and detailed reports on accommodations that I can recommend to you. I hope you enjoy finding your perfect holiday home!